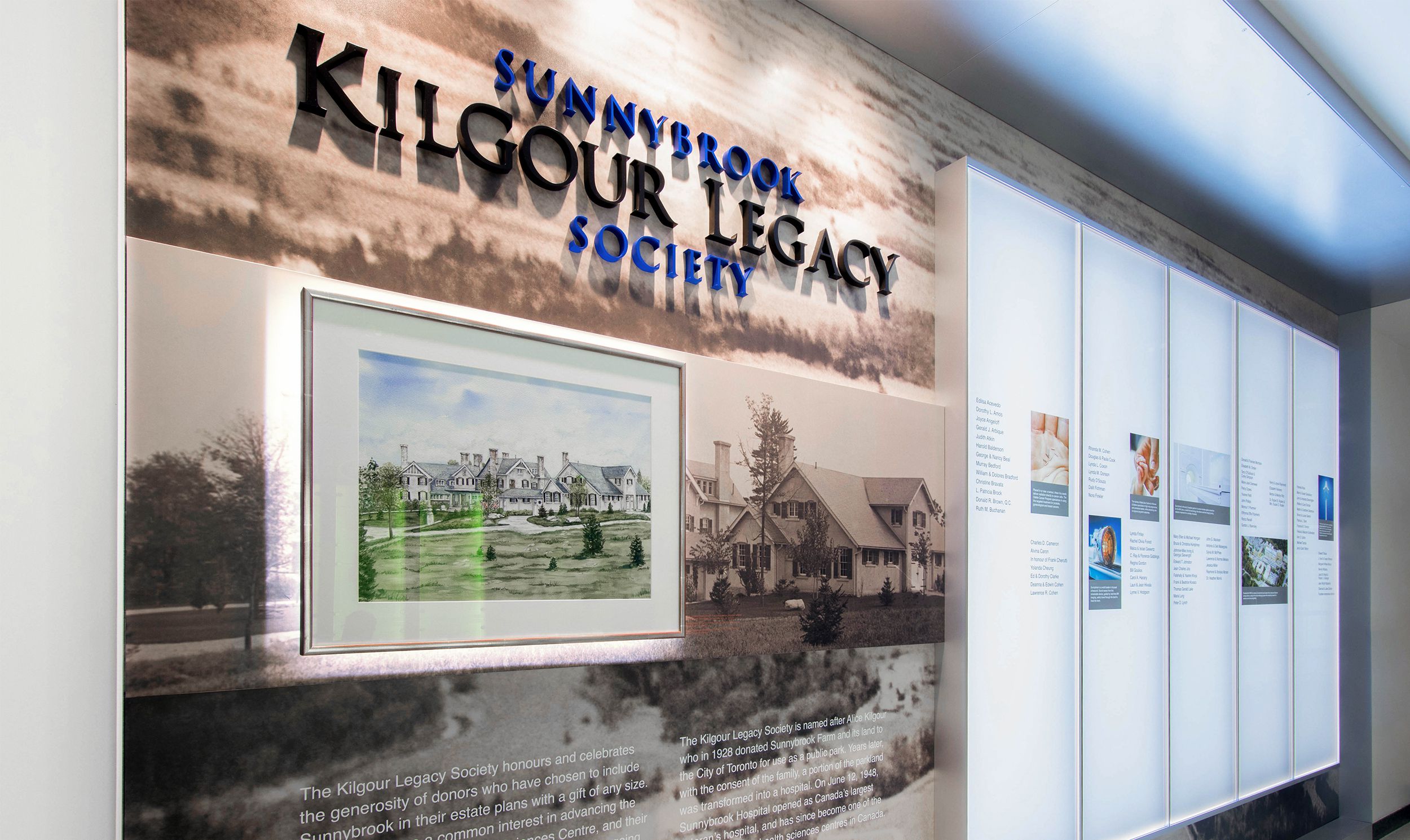 Through our long relationship with Sunnybrook, a fully affiliated teaching hospital of the University of Toronto stretching across three campuses, we are often called upon to help the organization show their appreciation to their committed donors through a series of recognition displays. 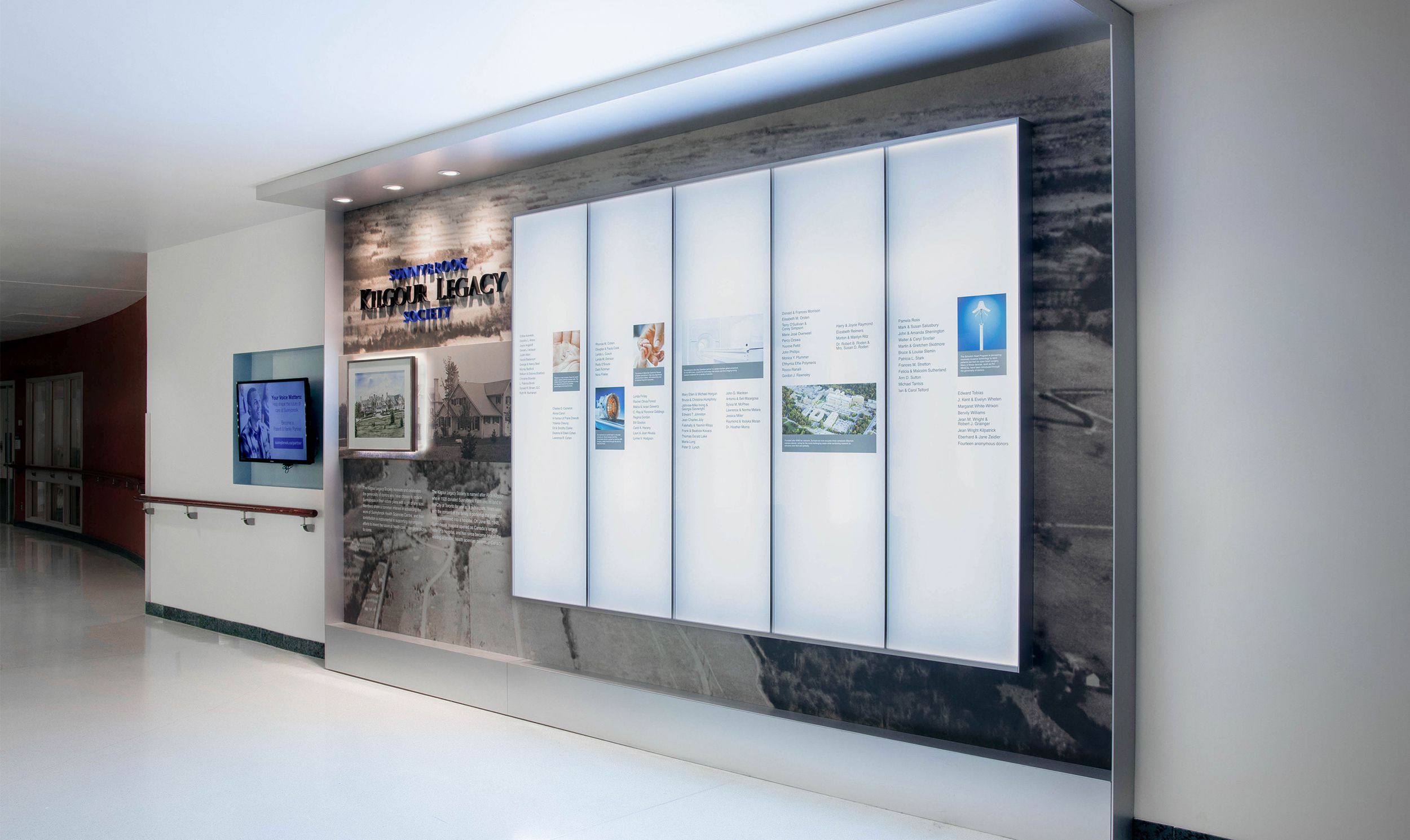 At Sunnybrook’s main campus, Entro designed a display for the Sunnybrook Kilgour Legacy Society. Around 1909, Joseph Kilgour established one of the first country estates on Bayview, when he bought the two-hundred-acre farm and named it Sunnybrook Farms. When he died, his wife Alice donated the farm to the city to be used as a park, which later became Sunnybrook Military Hospital. 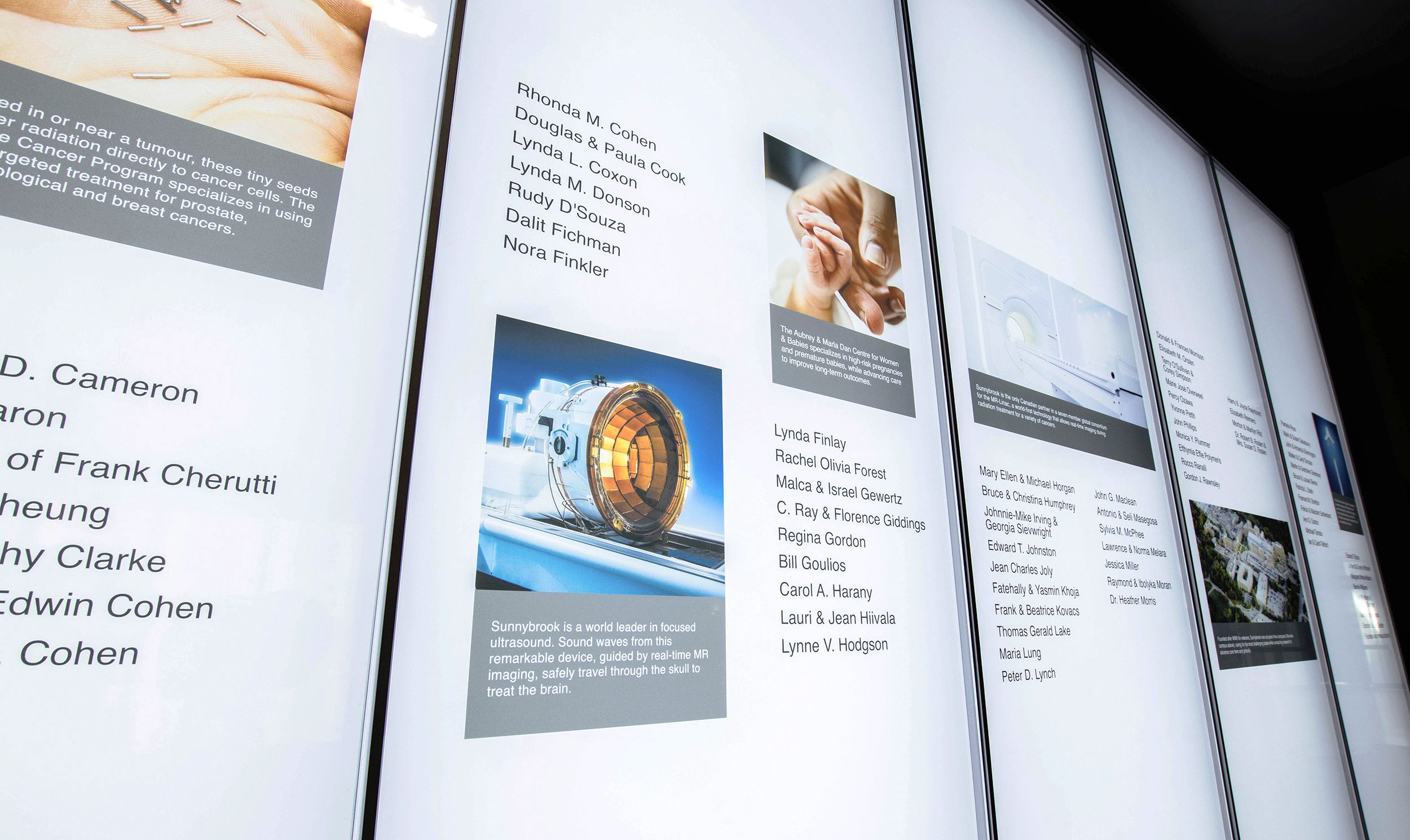 The Kilgour Legacy Society display celebrates those who, like Joseph and Alice Kilgour, have made a legacy gift. All names on this display are illuminated on glass. Composite metal panels behind show an aerial image of the original Sunnybrook Estate. A halo illumination technique is used to feature an original watercolour painting of Sunnybrook Farms by artist Daphne Tully. A neutral palette and typeface follow the standard used throughout the building while highlighting the Kilgour Society brand. 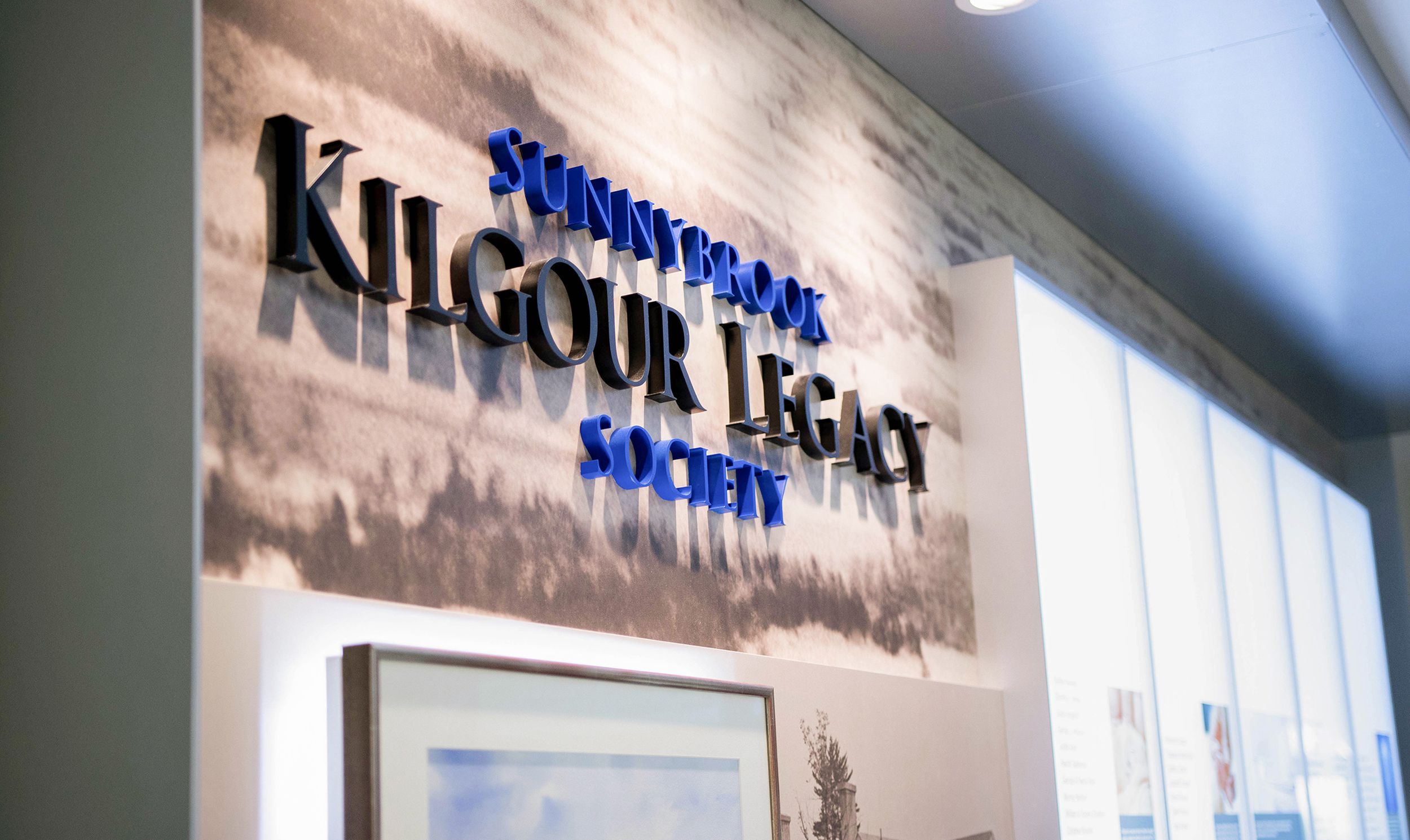 At Sunnybrook’s Holland Orthopaedic & Arthritic Centre, we designed another display honouring Dr. Charles Stewart Wright, who in 1955 opened the Orthopaedic and Arthritic Hospital with Dr. James E. Bateman. The hostipal merged with Sunnybrook in 1998. The current name of the centre recognizes Susanne and William Holland’s $20-million investment in the Holland Bone & Joint Program and the building. 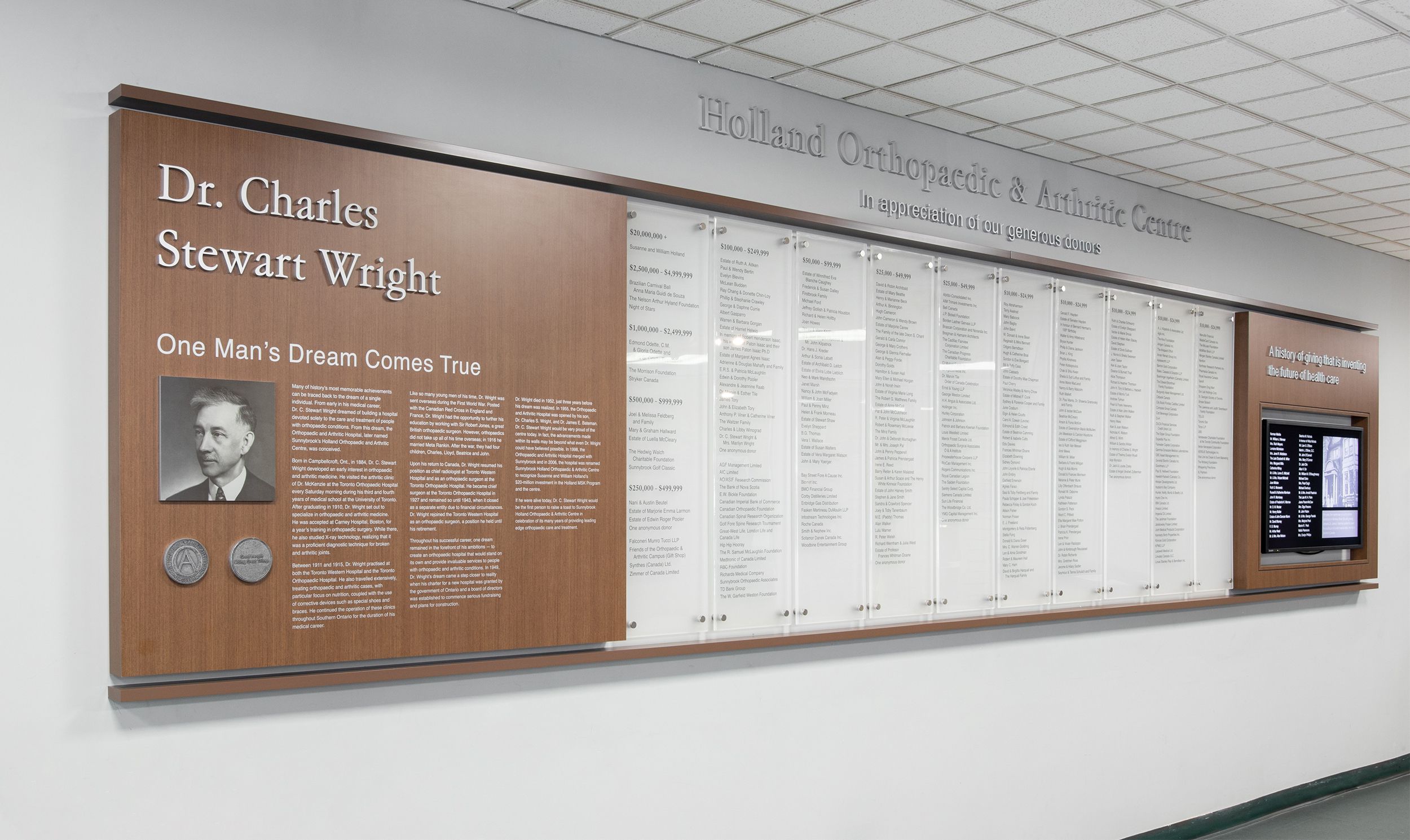 The display reveals this history with screen-printed text on wood laminate and large painted metal dimensional letters, denoting both the hospital name and the honouree, Dr. Charles Stewart Wright. Underneath, Dr. Wright’s portrait and medallions are reproduced on metal plaques from high-resolution digital scans. The static portion of the wall is designed for oncoming donors, while the digital installation displays permanent donor names with historic photography of the centre.

Enabling Sunnybrook to continue pursuing their vision to ‘invent the future of health care’, these displays impactfully represent the gratitude of the organization as a whole, encouraging further giving and enhancing the hospital environment. Find out more about Sunnybrook here.