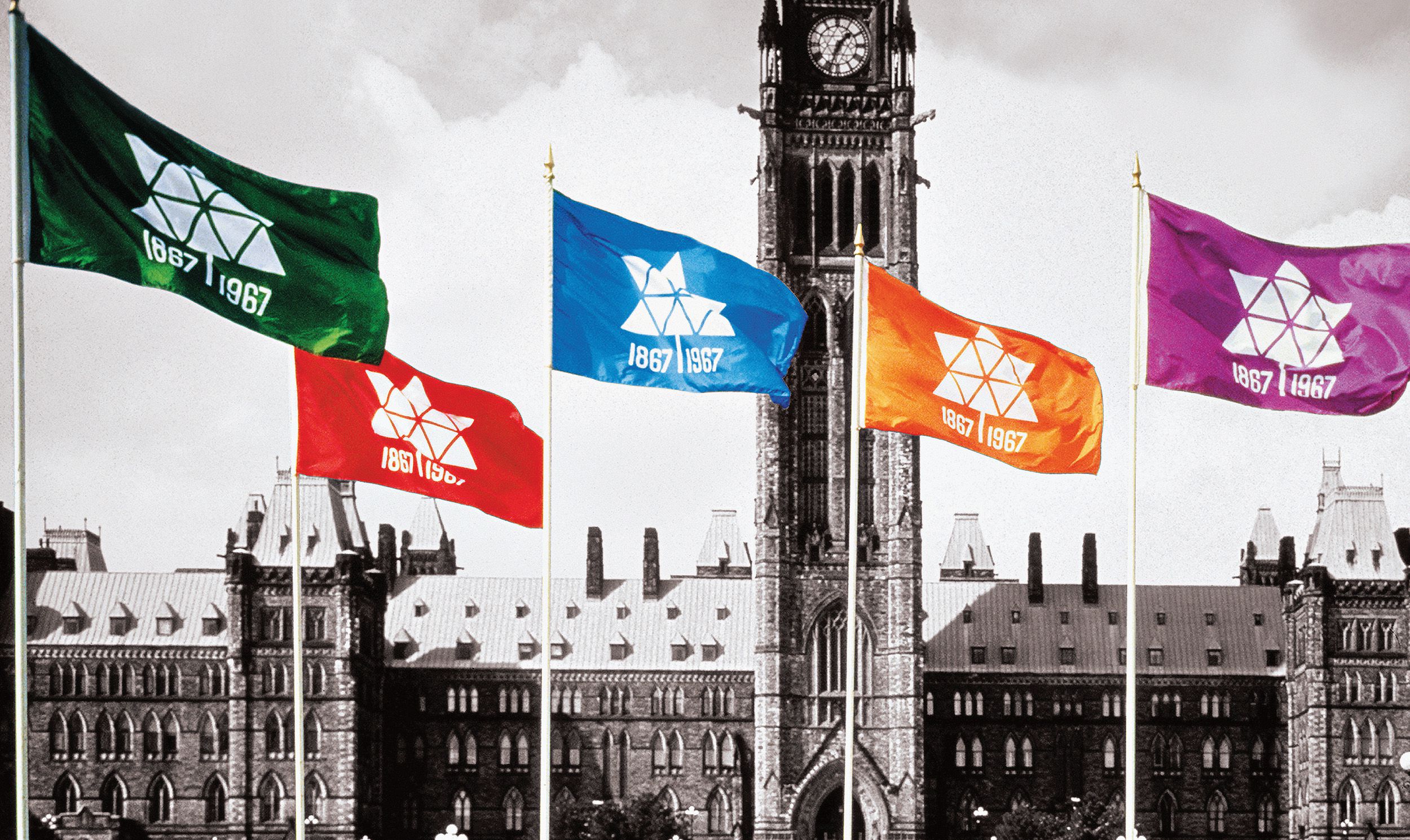 In celebration of Canada’s sesquicentennial as well as our recent book Cultivating a Design Legacy: The First 50 Years, we're looking back at the shared project history of Entro and Gottschalk+Ash Toronto and how we’ve contributed to some of the major brands and spaces that represent Canada. Our history began with one of the most iconic symbols of Canada – the 1967 Centennial logo designed by G+A co-founder Stuart Ash.

Canada's 100th anniversary was a time for the nation to come together and celebrate our own unique identity as an independent country. After a unsuccessful design competition to create the Centennial logo, the federal government approached the typesetting and design firm of Cooper & Beatty to create it instead. Ash worked there as an apprentice, after graduating from the Ontario College of Art. C&B collaborated on the project with Ottawa design firm Paul Arthur & Associates to first write a brief, approved by the government. 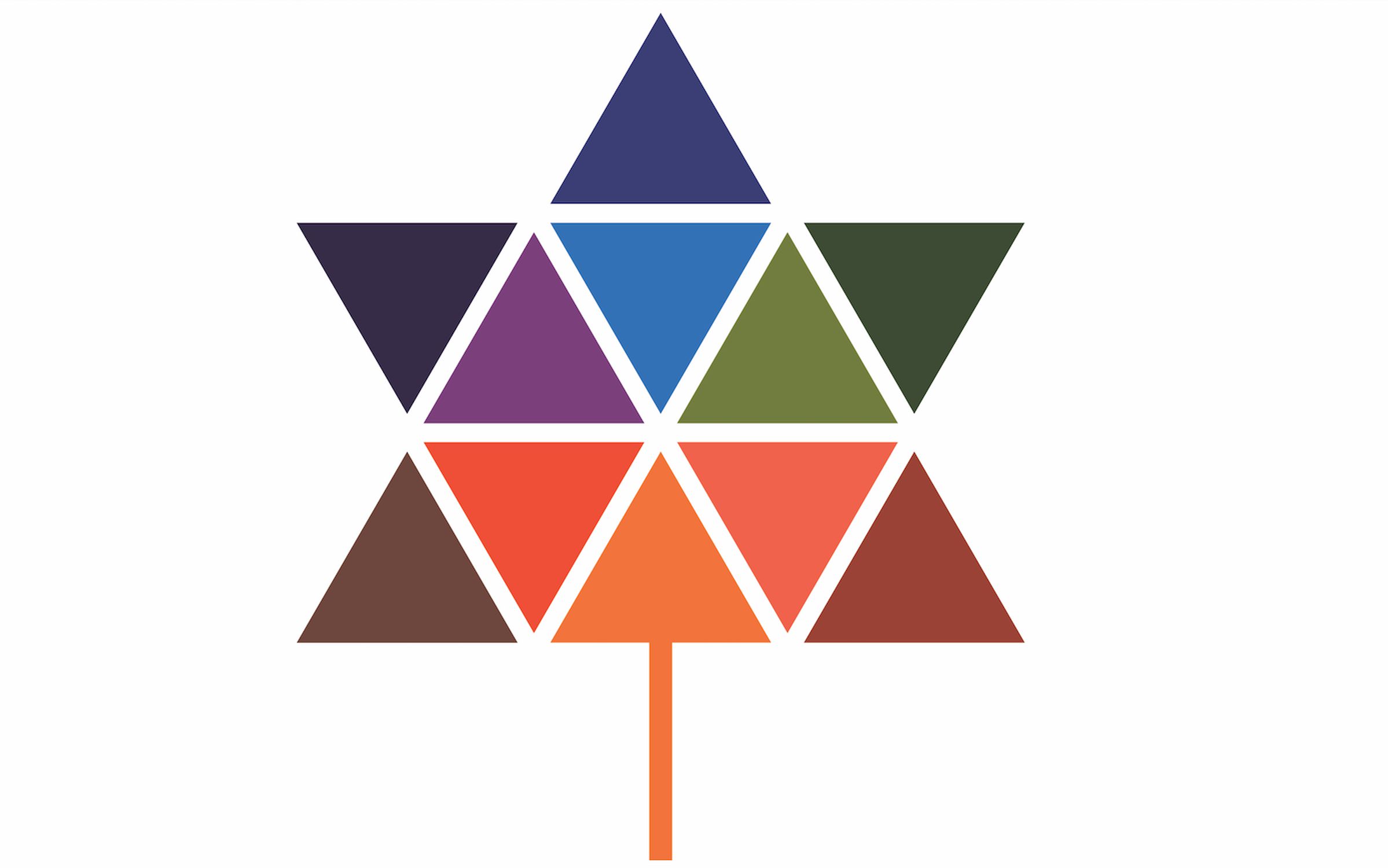 Design teams from both studios worked on solutions, and presented the government and Prime Minister Lester B. Pearson with two possible approaches by young designers Gerhard Doerrié and Stuart Ash. The government chose Ash’s stylized maple leaf constructed from 11 equilateral triangles – the first time the maple leaf had been officially chosen to represent the country. The Canadian public loved adopting the maple leaf as the national symbol cutting the British association and ancestral roots, repositioning the country's collective outlook with a more progressive international focus. 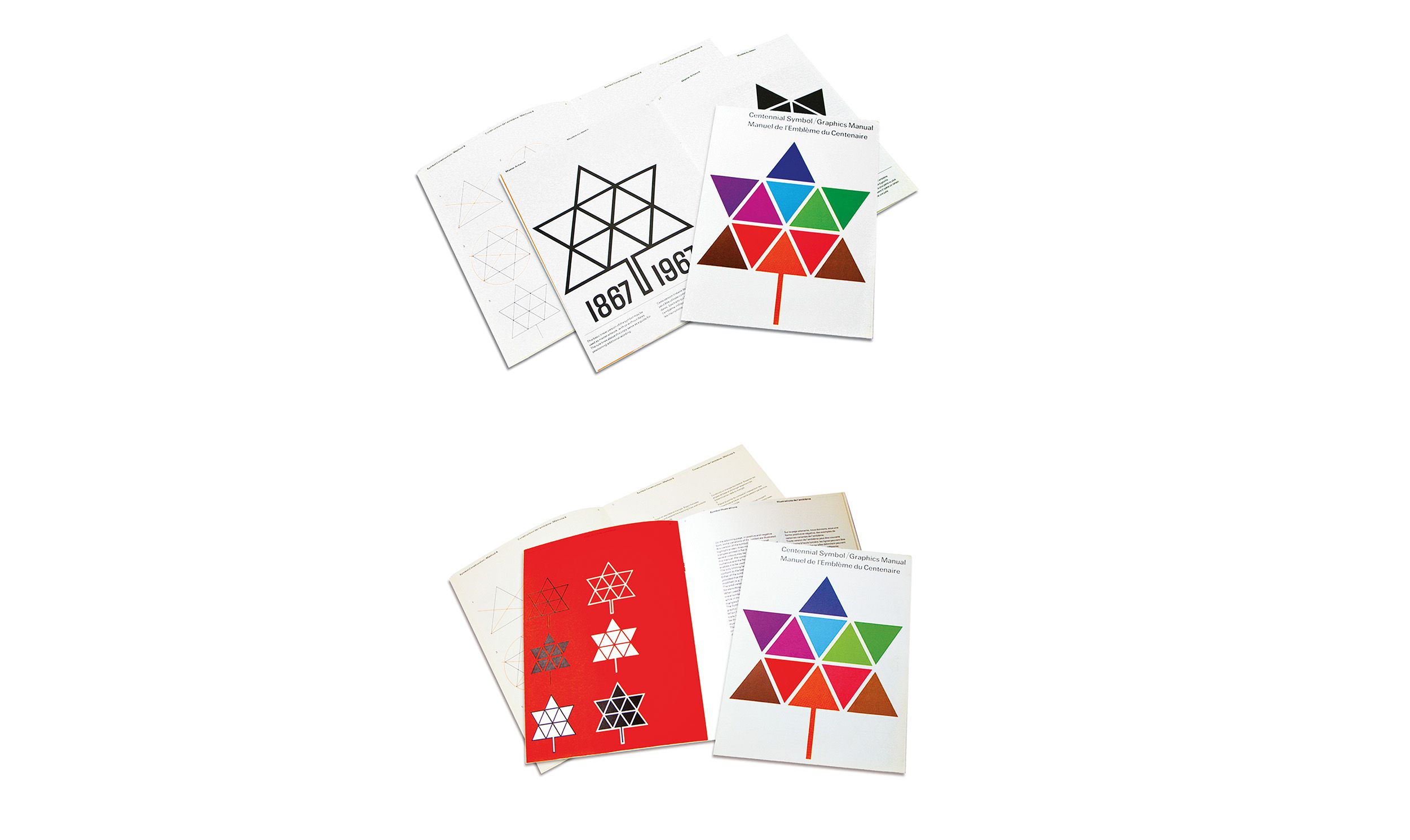 Ash moved to the Ottawa office of Paul Arthur, where he wrote and created the identity manual controlling the symbol’s guidelines and graphic use in all formal applications. The manual illustrated, among other things, how school classrooms across the nation could geometrically construct the symbol using the rudimentary tools available to them.

Click here to request a copy of the Centennial Symbol Graphics Manual.


Stuart had the pleasure of seeing his logo adopted across the country during Canada’s 100th anniversary, in applications ranging from flags on Parliament Hill to branded sidewalks and flower beds. The following year he received the Canadian Centennial Medal for the identity program. The reputation garnered here also helped to launch his and Fritz Gottschalk’s new design firm – Gottschalk+Ash. As we celebrate our nation's 150th birthday this year, we hope that the strong design legacy of the past will resonate with all Canadians as we continue to thrive in the future.

A National Conversion to the Metric System

A major transition in Canada’s history was the conversion to the metric system from the imperial system of weights and measures. The process of metrification was making metric units — such as metres, kilograms and degrees Celsius — the common units of measurement in Canada. The Metric Commission was established by the federal government in 1971 to accomplish this, and their role was to ensure a planned and coordinated conversion in all sectors of the Canadian economy and to disseminate information on metric conversion. To enable this, the commission brought Gottschalk+Ash Toronto on to create a simple, flexible and functional symbol. 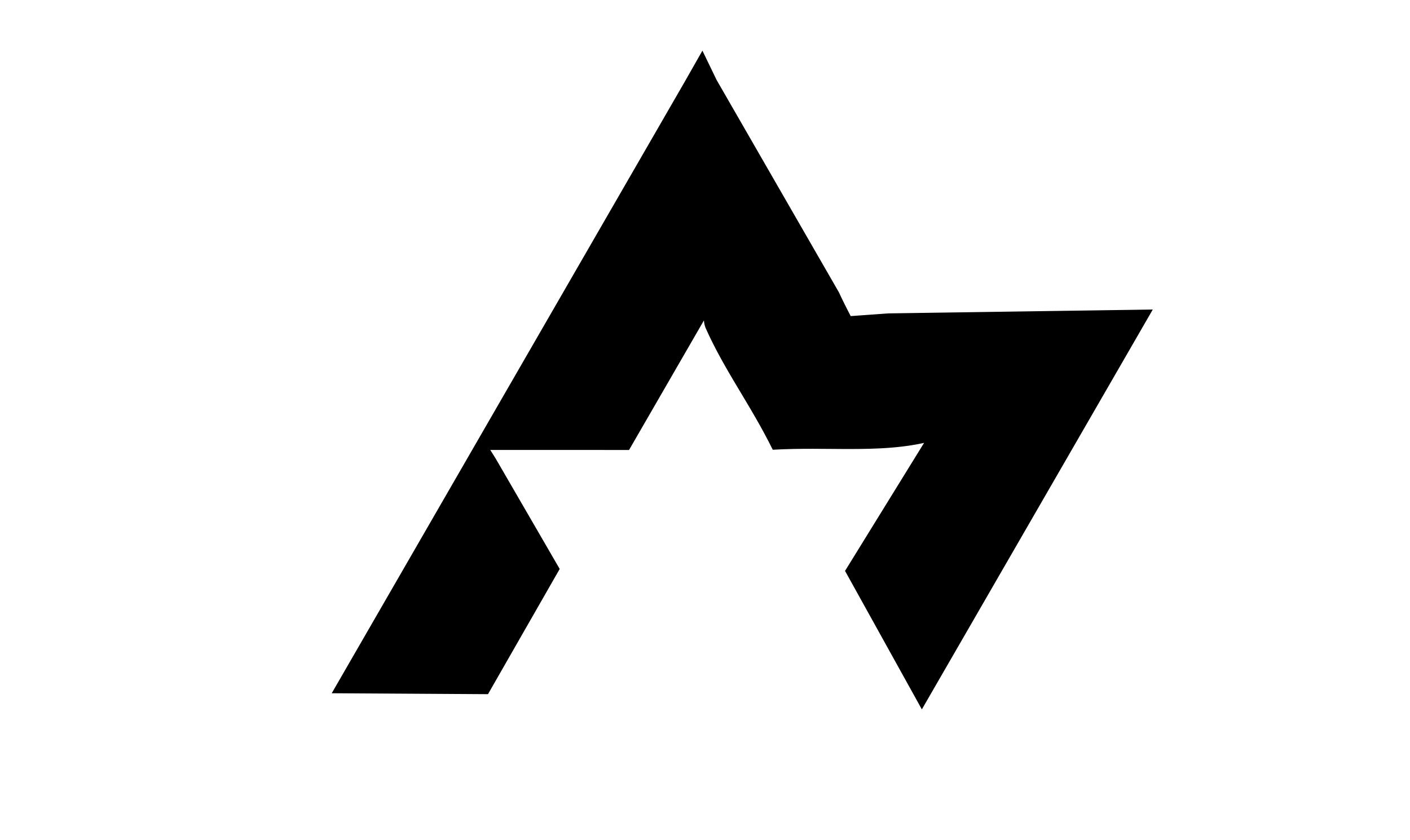 The metric symbol had to be simple, so kids could easily incorporate it in their school projects, and adaptable to a lot of different uses at a wide range of sizes. It also had to be versatile enough to work well whether embossed on the head of a bolt or appearing on packaging or a sheet of plywood. Incorporating a stylized maple leaf in the letter M and usually shown in red, the metric symbol could be adapted to a wide variety of reproductions, including other shades of red, as well as black or white on a red background. 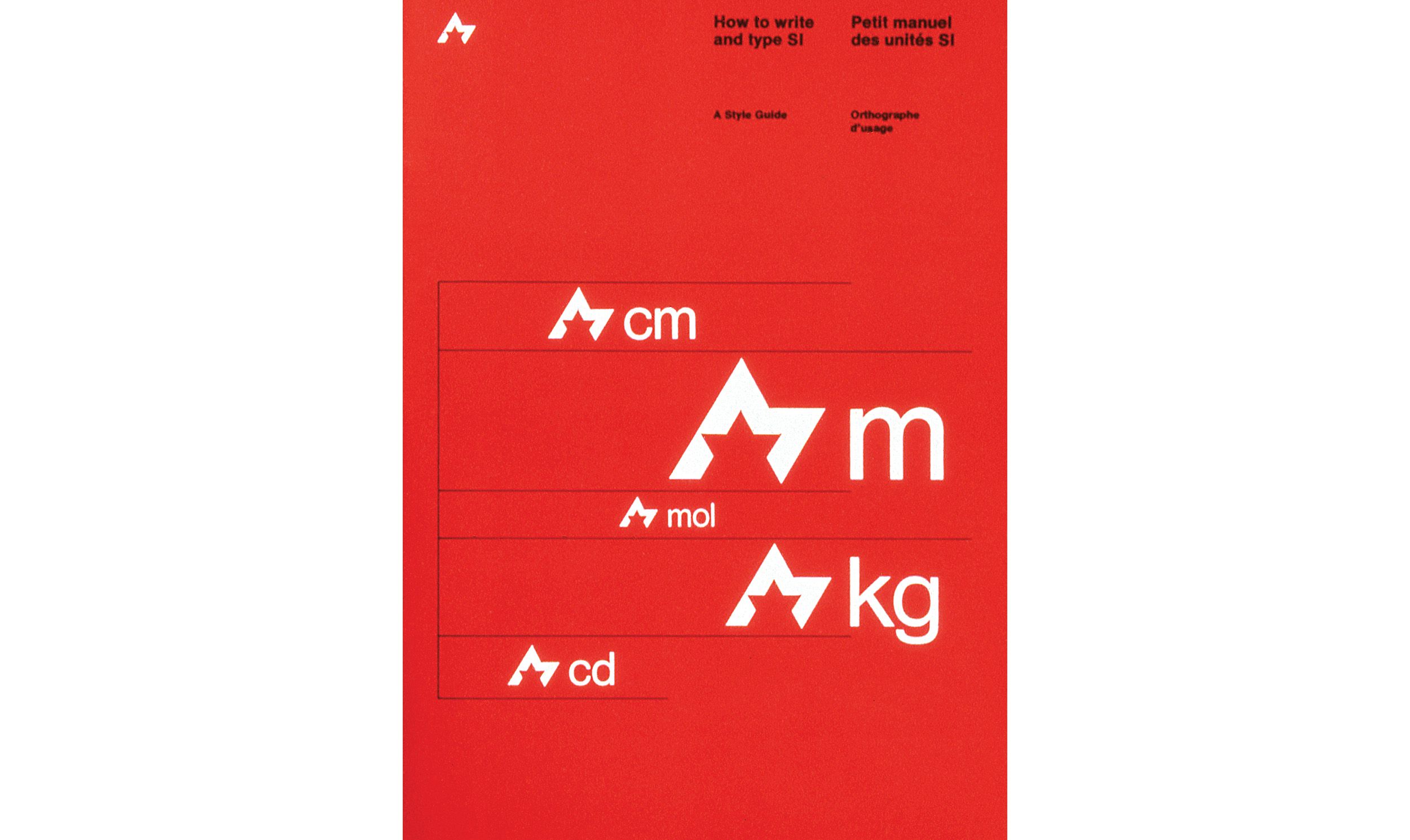 Although trademarked by the Commission, the logo was free to use by any organization producing Canadian metric products. With the help of Gottschalk+Ash Toronto, the Metric Commission successfully completed its mission in 1985 and was later dissolved. 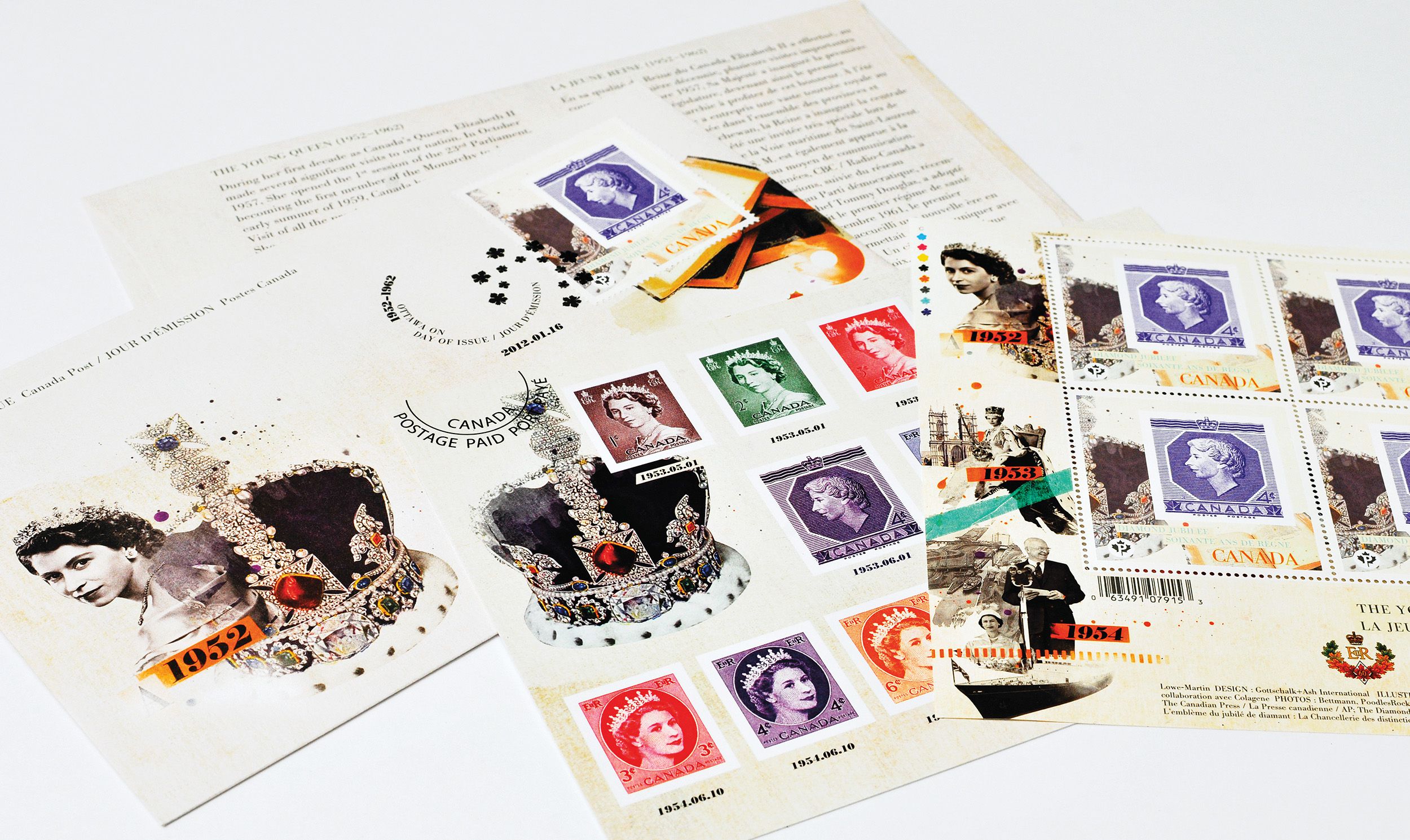 Although a stamp is small in size, it carries an important message about the culture of a country. Canada Post, our country's postal operator, has a national Stamp Advisory Committee that helps it select ideas from suggestions that are solicited from all Canadians. The stamps must be able to work well in miniature format, appeal to both the general public and collectors alike, and deliver instant glimpses of Canadian culture across the nation and around the world. Over the years, Entro and Gottschalk+Ash Toronto have created many stamps and collections, including ones celebrating Queen Elizabeth’s reign, the Canada Post Millennium Collection and the 100th anniversary of the Royal Ontario Museum. 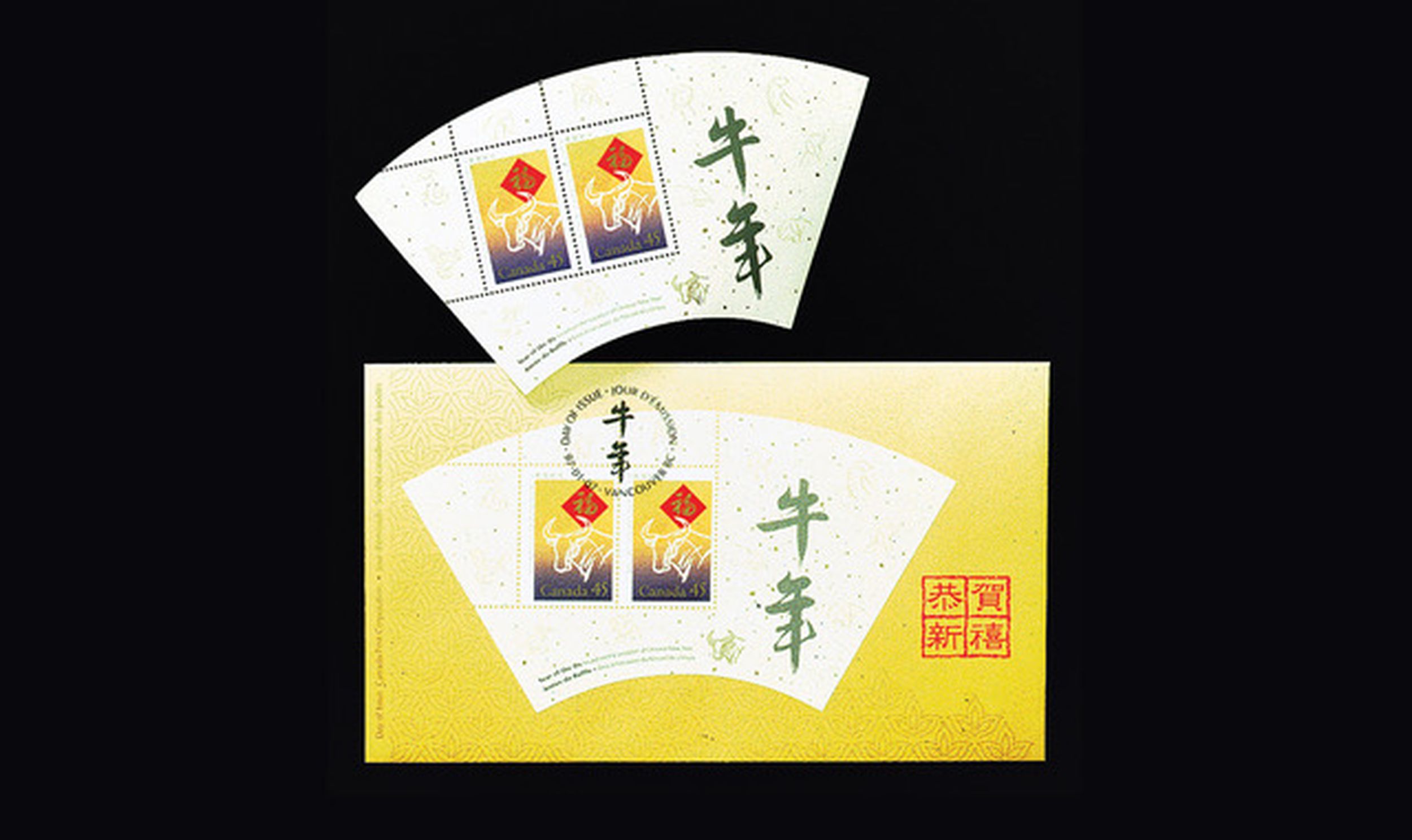 Stamp design also has to work well in other products, such as the first day cover and even the stamp’s cancellation mark. According to Canada Post, “stamp designers are selected for their demonstrated skill in both graphic arts and miniaturization, and for their potential to create new and innovative stamps. Designers’ imaginations are restricted only by the size of the final artwork.” 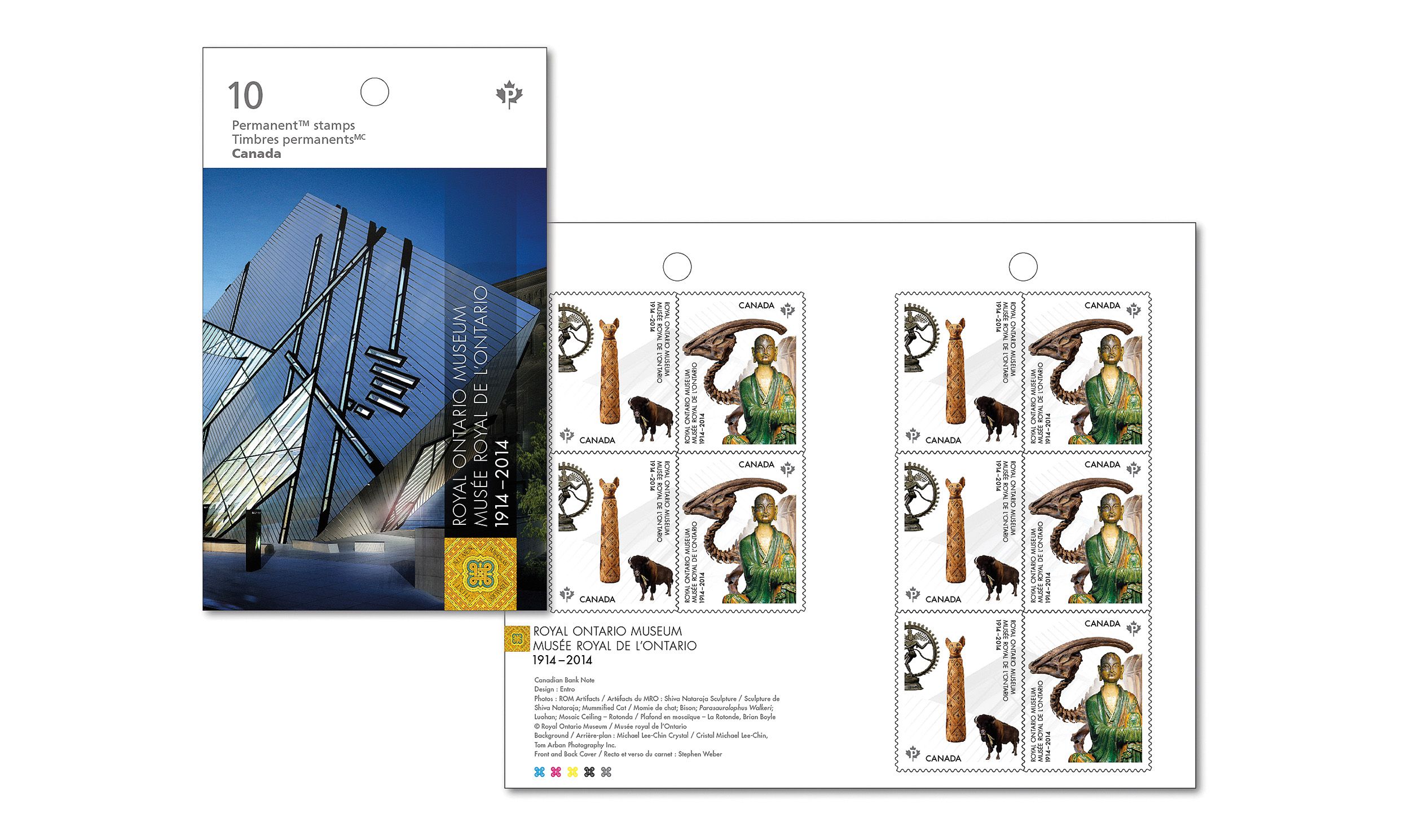 Carrying on the tradition that Gottschalk+Ash Toronto started in the 1970's, Entro is continually awarded many opportunities to design an array of stamps that represent Canada's most definitive and commemorative moments. 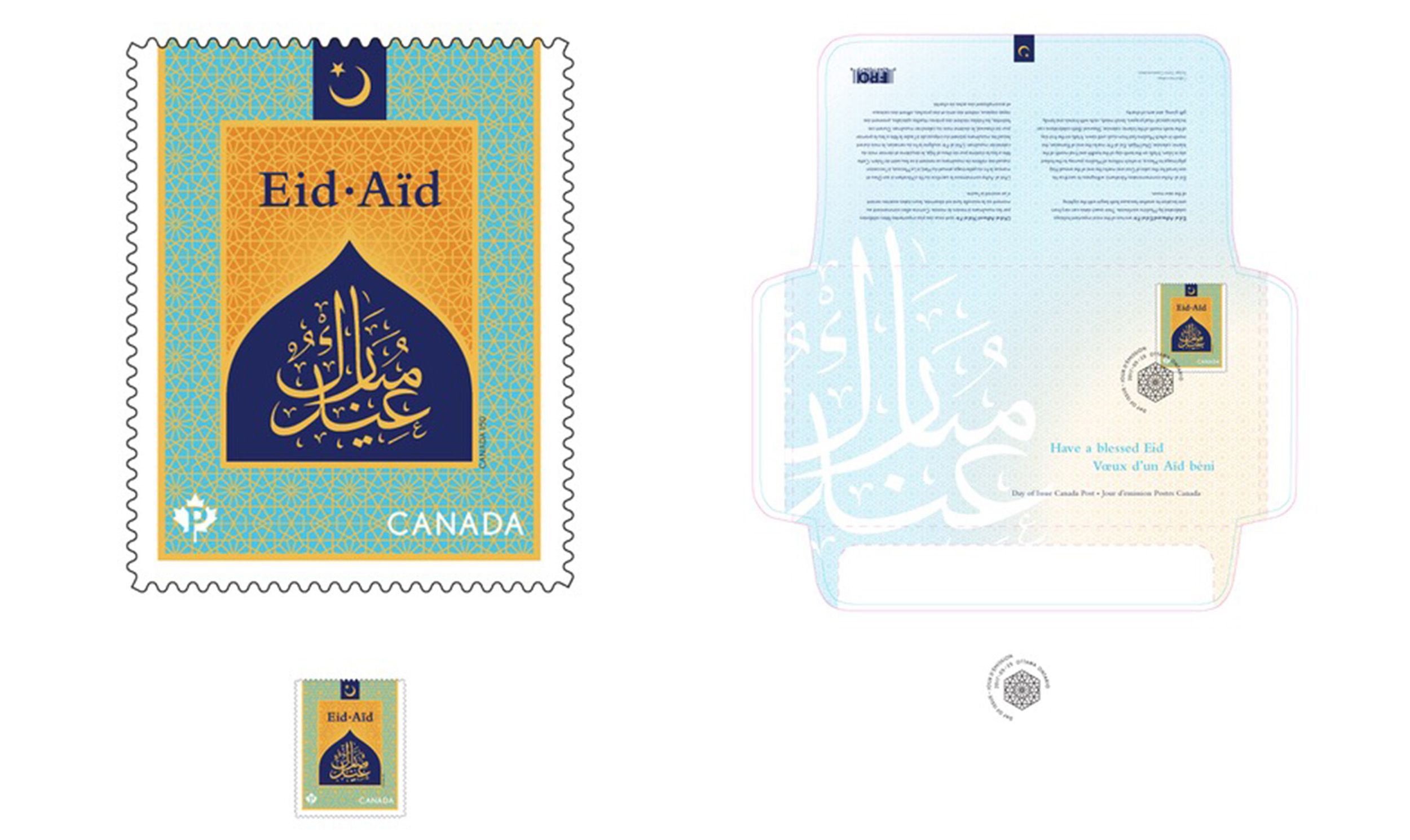 Recently our stamp designs were selected for part of a series of stamps for Canada Post's Cultural Celebrations initiative for 2017. The first stamp, for the holidays of Eid al-Fitr and Eid al-Adha was launched in May, and has had a positive reception from the community. Our stamp designs for Diwali and Hanukkah were also selected, and will be launched in the coming months. Learn more about the Eid stamp here. 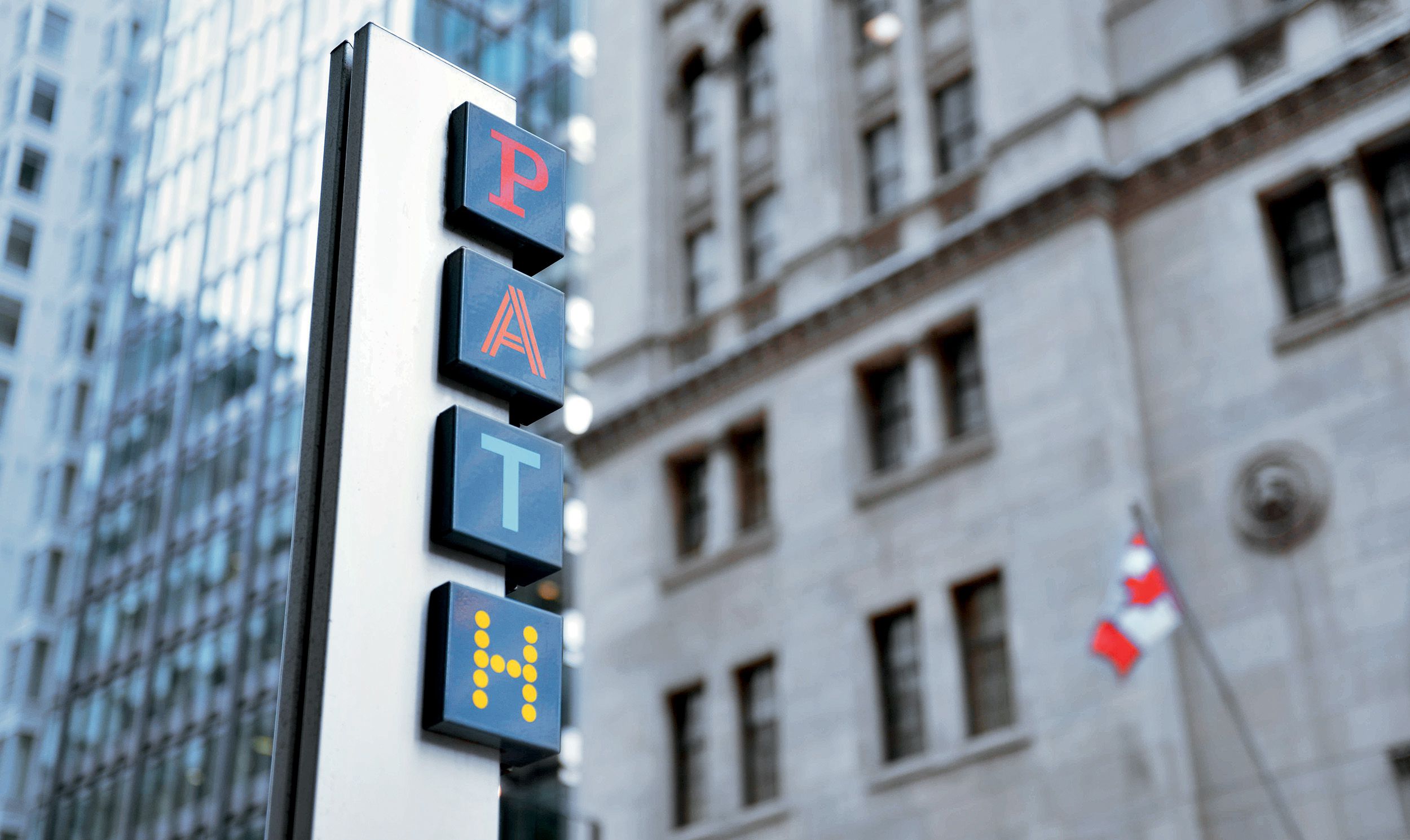 In a country known for its colder temperatures, Canada's major cities have to innovate to create liveable and exciting settings to attract residents, visitors and businesses from abroad. As Canada's largest municipality, Toronto was early in recognizing this, and created PATH. As the largest underground shopping complex not only in the country, but also in the world, PATH has 371,600 square metres of retail space, and a length of over 30 kilometres. It connects over 50 buildings including 1,200 shops and services, eight subways and more. In 1988, Gottschalk+Ash Toronto and Keith Muller+Associates accepted the challenge of creating an overarching brand and signage system for this underground labyrinth. The intuitive wayfinding and strong identity that the team created for PATH changed the entire landscape of the city and enabled Toronto to truly become a "City for All Seasons".

By using different fonts for each letter of the PATH, the identity represents the excitement of the downtown core, while the colours correspond to specific directions and were picked up in a compass rose design used to orient walkers. Every letter in the PATH logo is also contained in a square, the same way each building on the map is inside a square, representing waypoints on a route. On signage, a durable yet beautiful porcelain-finished enamel was chosen to avoid vandalism and damage. 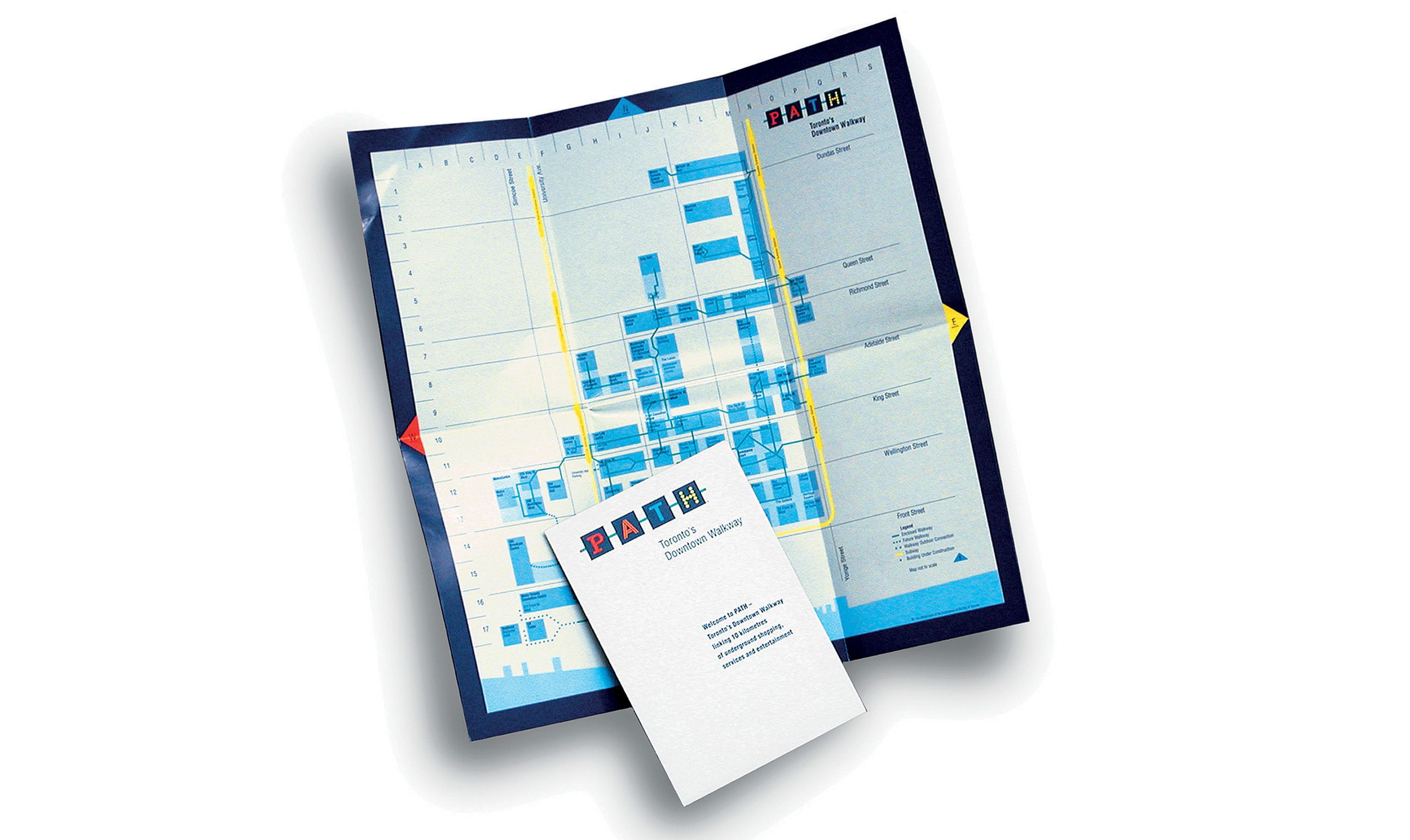 The map had to be flexible due to a constantly growing and changing downtown core. Considering how people actually use maps, the design team realized that people usually turn them in the direction they are headed. Instead of giving all large maps in the system the usual north straight-up orientation, the perspective of the maps were shifted according to the direction the user was actually facing. The PATH system is itself a destination for locals and tourists alike; it continues to expand and shape the city's underground landscape.