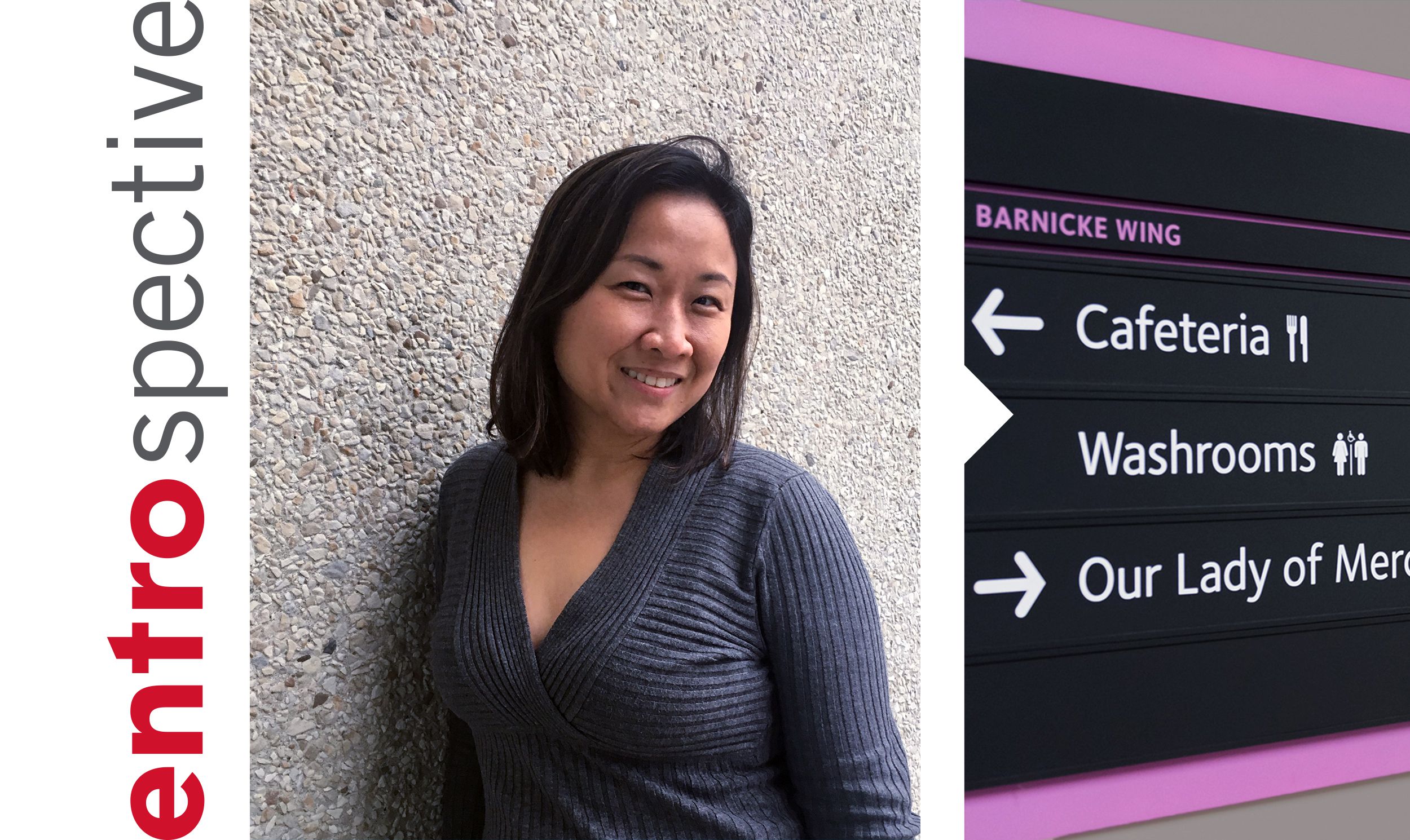 A Senior Asso­ciate at Entro, Cynthia Damar-Schnobb has extensive expe­ri­ence in indus­trial design, envi­ron­men­tal graphic design and user-interface design. She brings a compre­hen­sive knowl­edge of wayfind­ing strate­gies and a thor­ough under­stand­ing of manu­fac­tur­ing meth­ods and tech­nolo­gies in design­ing three-dimensional forms. Responding to cardinal directions being inappropriately used as the main method of providing directional information, she has written 'Intuitive Navigation in Interior Spaces Starts Here' to explain this method and its relationship with wayfinding and orientation within interior spaces. Read below. 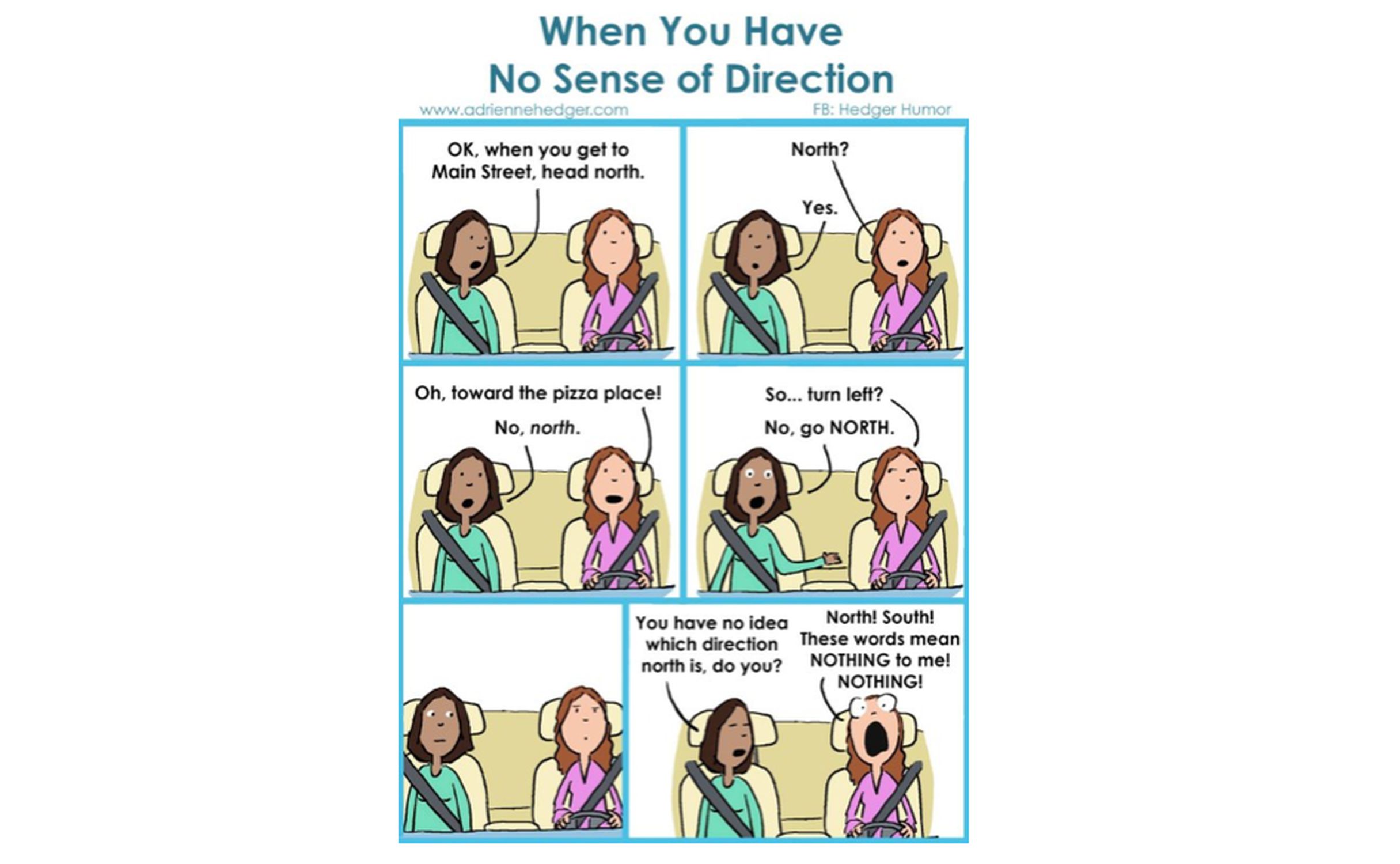 “..keep heading that way until you see a round blue sculpture – you can’t miss it, then turn left at the sculpture, head down the corridor for about halfway, the room you are looking for is on the north side of the corridor”

I saw this comic strip making its rounds online, being shared many times with captions not unlike ‘This is SO me!’ by many social media users. It made me think about the many instances where Cardinal direction (north, south, east, west) is inappropriately used as the main method of providing directional information. In this piece, I will touch on its relationship with wayfinding and orientation within interior spaces.

How many times have you stood in front of a directory map, perhaps in a shopping mall or in a stressful environment such as a hospital, and you think to yourself, “Oh this is a terrible map!” but you couldn’t really pinpoint what exactly were the attributes of the map that make it so terrible?

Many of us have seen a directory map inside a public facility that is oriented with the north side of the facility shown on the top part of the graphics. Unless the direction in front of the user is also north facing, we’d likely see a few people standing around the map trying to find their bearings, tilting their heads whilst attempting to figure out which direction ‘straight ahead’ really is, “Is it to my right? ..and then I have to turn where?”.

There are good reasons behind the best practice of orienting the user to a map with the ‘straight ahead’ direction being on the top part of the graphics. They include:

An interior directory map’s orientation is just one example of how Cardinal direction may be misused. Space planners sometimes overlook the fact that not a single user of the facility will be viewing the space from the bird’s eye perspective. We’ve all seen names such as South Elevator being used in a facility where there is no other spatial cue to help indicate where north and south starts and ends within the building. It was likely named ‘South Elevator’ the day it was drawn on the south side of the floor plan. This is generally not helpful to users as more often than not, it creates confusion. Sadly, this is usually when signage is needed - not to enhance the users’ experience - but rather, as a band-aid solution to make up for poor planning.

There are certainly exceptions and examples of when Cardinal direction may be used successfully as a means of orientation within an interior space, such as when the orientation to outside is cleared through large windows and/or in simple open spaces with distinct architectural layouts (i.e. in an elongated space that spans north/south). This does not absolve a designer of the importance of having supporting directory maps that are intuitive and designed with best practices in mind.

Successful wayfinding starts at the space planning stage. While a directory map is just one of many tools that assist with wayfinding navigation within an interior space, it is the one that greets the users upon entry to a facility and is consulted the most by those who are lost within it. Certainly there are other factors that have to be considered when creating an effective wayfinding strategy. Ensuring a map is oriented correctly gets us part of the way there, but other considerations such as: nomenclature, landmarks, thresholds, lighting, as well as graphic elements including icons, pictograms, colour, and typography - to name a few - must be considered.. but let’s leave that for next time.